The Heat, Lakers, and Thunder Are All Powerhouse Teams

The rankings are based on a combination of quality of players, expectations, and how awful the team was. I’m ranking best outcome to worse outcome.

My All NBA Team

I almost put Kevin Durant at shooting guard because he should be on this list.

This belongs to Dwight Howard. I don’t want to hear about how Derrick Rose is so great. Look, dude isn’t even top five in the NBA (FYI top five: LeBron James, Dwight Howard, Kobe Bryant, Kevin Durant, and Dirk Nowitzki). Don’t get me wrong he’s a good player, but he is replaceable. On the other hand no one changes the game on both ends of the floor the way Dwight Howard does. He is the most dominate force in the NBA, and the MVP.

Best Team in the NBA

The Los Angeles Lakers are the best team. It may be seen as a copout, but they’re the best. The bottom line is they would be the favorite against every other team in the NBA. They have the best closer in Kobe Bryant, and the best coach in Phil Jackson. The Lakers should win the championship.

This has been the best regular season in recent history. I think it can spark another golden age in basketball, and I want to thank LeBron James (you’ll have to excuse me for a moment I just threw up in my mouth). James and the Miami Heat changed the way originations put their teams together. Now thanks to them we have powerhouse teams in big markets (the downside is terrible teams like Toronto ad Cleveland…just threw up in my mouth again).

There are 6 teams that have a legitimate shot at winning a championship. I can’t remember the last time that was the case. Wide open playoffs should make for some excitement.

Posted by Kortney Shane Williams on April 17, 2011 in Basketball

There is plenty to talk about this week in college football. The BCS picture is taking shape, Cam Newton gets closer to Heisman, and Oregon has staked their claim as the Alpha Dog of the Pac-10. I’m going start with Boise State, because they’re crawled up in the fetal position, asking why everyone is picking on them. I have changed my stance on the Boise State issue. In previous weeks, I thought they were being jumped in the polls because of their competition. However, they’ve been jumped in the BCS poll this week by TCU. Armed with that information, I’ve come to the conclusion that Boise State is preserved as being not good. I DO NOT AGREE. Let me refresh everyone’s memory. There’s one team that beat both TCU and Oregon last year. That’s Boise State. If you think a miracle happened in the offseason, and somehow there now better than Boise State. You are wrong. For a team to be good, you must win all the games you’re expected to win and some of the games you’re not supposed to win. Neither Oregon nor TCU has done that…The Boise State Broncos do it every year. Everyone is falling in love with Oregon and their offense, but that defense is putrid at best. Sooner or later that offense will stall and a team will hang 40 on them. If you think Oregon is unbeatable, I have some 2010 Rose Bowl tapes I want you to check out.

I heard a question on ESPN Radio this week. They asked if you had to pick a college football program, would you want to be Miami, Notre Dame, or Michigan. If you forced me to pick I would take Miami because of their location, but I don’t want any of those teams. The fan bases of those teams don’t understand that their identity has changed in college football. They now need to change their approach in order to be successful. Notre Dame has to run an offense that will work for the personal they can recruit (which they are), Michigan has to commit to an identity (by the way Wolverines fans, how would you like to have Lloyd Carr?), and Miami, “If you want to be big time, act like you’re big time. Upgrade that dump of a facility, and quit trying to sell that 1980’s we’re “The U” facade. This may be a news flash, but Jimmy Johnson ain’t coming through that door.”

Cameron Newton is a great college football player, and he could end up being a very good NFL player. I am thoroughly impressed with his play, and I think he has the inside track on winning the Heisman Trophy (now allow me to dismiss the rest of his season). Auburn is not going to the National Championship. In 2 weeks they will lose to Alabama by double digits.

The game of the week is TCU v. Utah

I really like this game. You match two undefeated teams against each other that get no national respect. However, whichever team wins this game will at least be the 3rd ranked team in the Nation. I actually think the BCS polls will have them ranked at number 2. TCU has a defense that will be up to the challenge of stopping Jordan Wynn and the Utah Utes. Along with their defense TCU has a senior quarterback in Andy Dalton that can get the job done. Utah has home field advantage (which is probably the only advantage they have). TCU has never beat Utah in Salt Lake City. With that being said, I have TCU winning this game. They’re just better than Utah this year. I can’t wait to watch the game. Too bad I won’t be able to watch the game. This game is not on national TV, despite both of these teams being undefeated and ranked in the top 5 (please see the first three sentence of this paragraph if you need to know why this is). However, that’s not going to stop me from predicting a score. 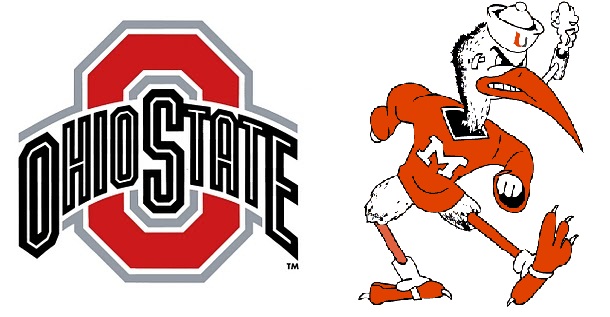 The Game of The Week Will Be in The Horseshoe

“Boise State and their Cinderella story lives to fight another day.” What? I saw the game on Monday night. I had some food to eat, I had some drinks, so I could have been a little sleepy, but I didn’t see a Cinderella team on the field. They were wearing those weird Cinderella like uniforms, but you can’t let that throw you off. A Cinderella doesn’t go undefeated for 2 years, and win an opening day road game in front of 90,000 people. What I saw Monday night was a BCS contender. Now I did pick Virginia Tech to win the game, but I was wrong. Boise State is a better team than Virginia Tech, and they proved that in D.C. on Monday night.

I was also somewhat impressed by Notre Dame. I don’t know if I was impressed as much as I was surprised. They had an offensive game plan. I haven’t seen them have a game plan for 4 years. Good for Notre Dame. Hopefully the next time I’m surprised it’s because you beat a team that was actually good.

So this week in college football there are great power teams in action. You have Michigan v. Notre Dame. That game has some baggage attached to it. If Michigan can win that game Rich Rodriguez will probably keep his job. At the same time, if Notre Dame wins Brian Kelly might get a lifetime contract. By the way where is Michigan’s quarterback from? Dude doesn’t tie his shoes. He’s probably from some place where they chase rabbits for fun. Penn Sate v Alabama could be an upset, however it’s more likely to be a massacre. My game of the week is Miami v. Ohio State.

Someone is going to pass a test this week. Will Ohio State step up, and prove they have a big game team after recent years of disappointment. Will Miami’s young talented team pull an upset, and propel themselves into National title contention. For Ohio State this game comes down to expectations. “Can you live up to being a favorite?” The Buckeyes have better players in every position, a better coach, and home field advantage. For Miami you have to have composer in a hostile environment. The Hurricanes need to play out of their minds. They can’t get caught up in everything surround the game. They must run the ball, and focus on getting first downs. However that mind friend, will not happen. Miami is young, inexperienced, and they’re going to “The Horseshoe.” That’s a bad combination. You may be “The U” but you won’t beat “The” Ohio State University.